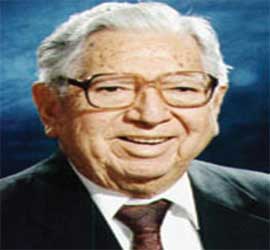 The Founder of Silva Method

José Silva is the founder of The Silva Method, and a pioneer in mind empowerment research. Silva dedicated his life to awakening the human mind’s hidden potential. After 24 years of research, he released his findings in 1966 and spent the rest of his life perfecting and teaching The Silva Method.

José Silva was an electrical repairman who developed a great interest for religion, psychology, and parapsychology. He spent much time learning about hypnosis, attempting to increase his children’s IQ. After experimenting and being convinced of his daughter’s sudden clairvoyance, Jose decided to learn more about the development of psychic abilities.

In 1944, José began developing his method, formerly known as Silva Mind Control, using it on his family members and friends, before launching it commercially in the 1966.

José Silva was born in 1914 in Laredo, Texas, USA. José Silva began at age six to support his family. Although he couldn’t receive a formal education, he learned to read and write on his own – in both English and Spanish. Instead of going to school, Silva earned money for his family by selling newspapers on the streets of Laredo, shining shoes, and doing odd jobs.

José Silva quickly developed entrepreneur skills. By the time he became a teenager, he hired youngsters to work with him, going door to door selling merchandise he had purchased in San Antonio. The youngsters were earning as much money after school as their parents earned working full-time, and young José was earning as much every day as the typical adult in Laredo earned in a week.

Although Mr. José Silva received no formal education, he received basic education indirectly from his own younger siblings who attended public schools in Laredo with his financial support. He started to study electronics by reading technical books of correspondence courses in his free time. This distant self-education allowed him to become the owner of one of the first radio repair companies in the border. With this knowledge, he built the largest electronics repair company in southern Texas in the 1940s.

José Silva’s career in electronics started to focus on the maintenance of communication equipment; after a long period of time it switched to the maintenance of biomedical appliances. In this context, he developed vital research skills. He departed the world in 1999. José Silva was always successful. His story is a true American success story.